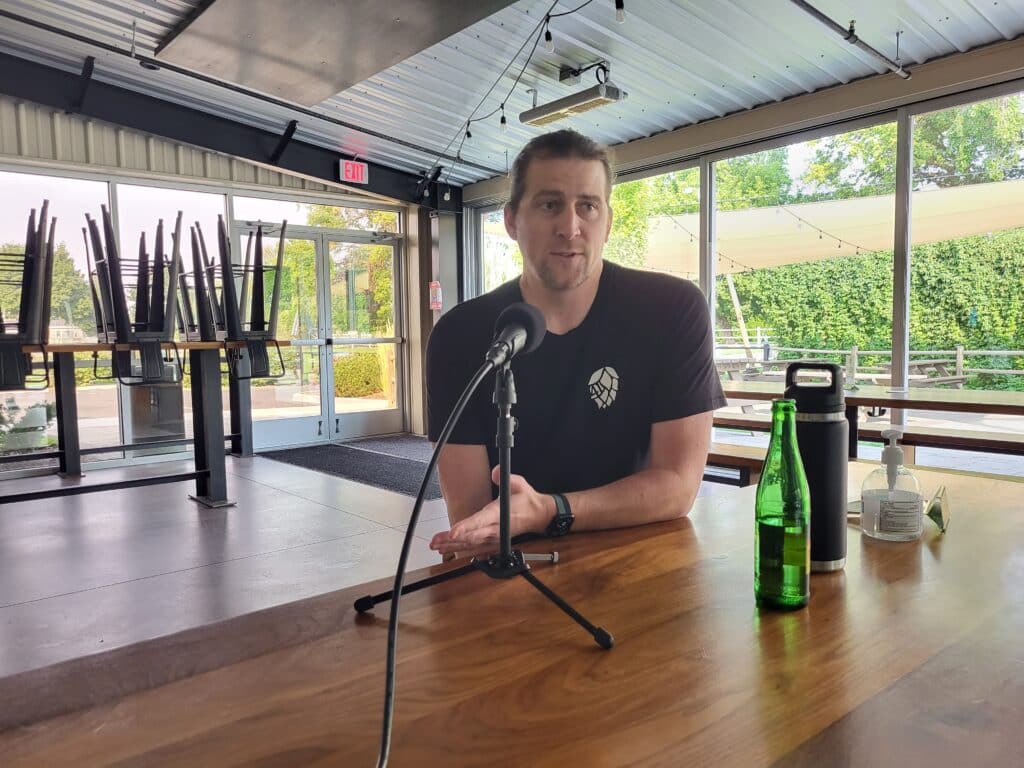 In the 1920s when the practice was more common, Meghann Quinn’s ancestors followed the railroad west and wound up settling a farm in Washington’s Yakima Valley.
Following the repeal of Prohibition, they got into the hop industry and have ridden the wave since; supplying the larger brewers through the uninspired decades of large-scale American brewing, and into the boom days of today’s craft surge.
Seeing the success of hops in the larger market coupled with an interest in homebrewing Quinn, her husband Kevin, and her brothers launched Bale Breaker brewing on the property in 2013.
Kevin Quinn is my guest today.
How close is the brewery to the field? It takes less than five minutes to get from the bine to the kettle, he says.
It’s more than hops here as well.
There’s an apple orchard on the nearly 3,000-acre farm, along with fields of Hungarian Wax Peppers, some hemp, and 2021 marked the third barley harvest. Last year they processed more than 200,000 pounds of barley, some of which went into Bale Breaker beers as well.
There is a real sense of pride that comes with growing ingredients where they are used and it’s clear from the steady stream of visitors that come through during this season and year round, that drinkers and other brewers feel the same.
-John Holl
This episode is sponsored by:
New Holland Brewing
Dragon’s Milk began as a single barrel experiment over 20 years ago at New Holland Brewing Company and has since grown to become the best-selling American-made stout. Aged in bourbon barrels, rich notes of roasted malt, chocolate, and vanilla make for a deliciously smooth and drinkable brew. Whether it’s sitting by a bonfire or binging the latest season of Game of Thrones, share a legend with Dragon’s Milk today. Learn more and find Dragon’s Milk near you at dragonsmilk.com.
Denver Rare Beer TastingHeading to Colorado for GABF? You should check out the Denver Rare Beer Tasting on October 7th. It’s an incredible afternoon of beer passion featuring America’s top craft breweries pouring rare, exotic and vintage brews to benefit the Pints for Prostates campaign. This is truly a bucket list event for a great cause where you get to try beers you won’t find elsewhere, and meet the men and women who brewed them. More information at pintsforprostates.org.