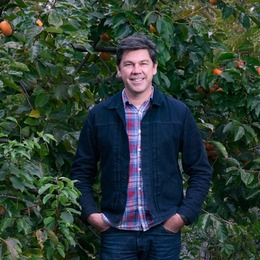 “You’ll hear how I first met Sean Lilly Wilson a little later in the show, but what I didn’t know back then and what I’ve come to experience over the course of nearly a decade, is his commitment to food, drink, hospitality, creativity, culture, and community.
Outside of Fullsteam, the brewery he launched in 2010, much of the growth of North Carolina as a premiere beer state has to do with the efforts he mounted – with a dedicated group of others – to change the then byzantine beer laws and restrictions.
It was an effort called Pop the Cap, and its impact is still felt today. His efforts haven’t stopped with the laws, but have moved onto the land. Through the brewery, work within the state guild, and conversation with other brewing professionals he wants to help southern agriculture grow and thrive. He’s called it “plow to pint” and the beers he and the brewing team have produced bear the fruit of that hard work.
Nationally, he’s been recognized four times by the James Beard Foundation as a semi-finalist in the outstanding Wine, Spirits, or Beer Producer category. Personally, he’s a nice guy to talk to. He’s thoughtful and earnest and an incredibly hard worker.
At the brewery he goes by CEO – Chief Executive Optimist – and works to bring forward thinking to both the original brewery in Durham as well as a new location – which opened on the day this was recorded, a day before it first aired. It will focus on pizza and beer pairings, something that might sound simple, but is actually a tightrope walk.”
This episode is sponsored by:

Stomp Stickers is a proud member of the brewers association that produces a wide variety of printed brewery products such as beer labels, keg collars, coasters, beer boxes and much more. Stomp’s website features an easy-to-use design tool, low quantity orders, fast turn times, and free domestic shipping. Visit StompStickers.com and use code DRINKBEER15 for 15% off your first order.