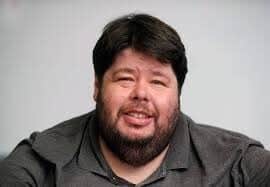 In the world of bars, pubs, and dives, one of the greatest signs of respect is to have a bar stool named after you. John Holl has a bar stool named after him in a Tennessee brewery. And the late great publican Don Younger of the Horse Brass Pub in Portland, Oregon, had a corner seat at the now closed Falling Rock beer bar in Denver named after him. With its recent closure, I wonder what happened to that chair. In the beer industry, one legit sign of respect is to have a brewery name a beer after you. And it’s not something that often happens for beer writers. It’s an honor I have not yet had and that’s probably for the best. Instead, SandLot Brewery in Denver years ago won some GABF medals for its Vienna style lager, playfully named Clueless Beer Writer.
But then there are writers like my guest today.
Norm Miller has been a professional journalist for almost 20 years, having worked at the same paper in Central Massachusetts that entire time. He’s from the region, and indeed lives in the house he grew up in. He jokes that there’s not much to do around there other than apple picking and some fishing.
Norm was a little hesitant to be interviewed and as a fellow journalist, I get that. We’re used to asking the questions and it can be a little uncomfortable handing the recorder to someone else. But I’m happy he agreed to chat as he’s a colorful character with some great stories to tell.
Norm is an interesting guy, so it’s easy to see why Wormtown Brewery in Worcester, Massachusetts decided to name a beer after him. It’s a great story that matches a great beer and he tells it in this interview.
Norm and I have known each other for a long time and we have some unusual things in common. First, we’re both trained journalists, folks for whom writing and and reporting are not just a passion but ingrained in ourselves. We’ve both written books about Massachusetts breweries. And as longtime beer writers, we’ve both covered beer in New England for decades. But we also have another connection, one I don’t often discuss. Beyond my work as a beer writer, my more full-time gig is as a criminal defense attorney in the Boston area. And Norm’s primary beat has long been crime and the justice system. We both speak a language unique to the courts and the Commonwealth, we know a lot of people in common, including lawyers, judges, and even defendants. And we both know it’s never a boring day in the world of crime.
He’s been covering it for almost 20 years for the MetroWest Daily News. He’s covered a lot of serious crimes, including murders, and too many trials to count. We talk about his experiences as a crime reporter, and how he wants to evolve his reporting beyond simply the details of day to day offenses. Norm wants to more deeply report on why these crimes are happening, their underpinnings, and he is also growing increasingly concerned about the ethics of reporting on crime in an age where the Internet never forgets.
For a reporter at a reasonably small market paper, Norm has a knack for going viral. His first experience with Internet fame came as part of a crazy few minutes he had at a local police station when a woman came in and threw bacon against the reception window. He talks about what that was like and the experience of going viral.
More recently, however, Norm went viral for the column he wrote when he retired as a beer writer. The column garnered coverage around the globe because of its candid nature. Norm wrote that he was giving up beer writing because he needed to stop drinking. He talked about the impact his tasting was having on both his physical and mental health. It was a bold and honest piece of writing and should be required reading for everyone in the beer industry. Spend anytime at a beer event or industry get together and it quickly becomes obvious that some and perhaps many in the beer business have an unhealthy relationship with the product they sell. Whether it’s overconsumption, drinking and driving, or forgiving behavior that would otherwise be unforgivable but for the presence of alcohol, it’s the third rail of the American beer business, one that few dare to touch. But Norm’s column dared to go there and we discuss it and his present thoughts on the issue in our conversation.
We also talk about his star turns as a television commentator on Nancy Grace, his love of 80s slasher films, and what it’s like to work in the trenches on the police beat for so many years.
For more information on the Beer Edge Podcast, follow us on Twitter @thebeeredge. And visit Beer Edge for more articles and engaging content.