Departed Soles Stirs Up A Banger 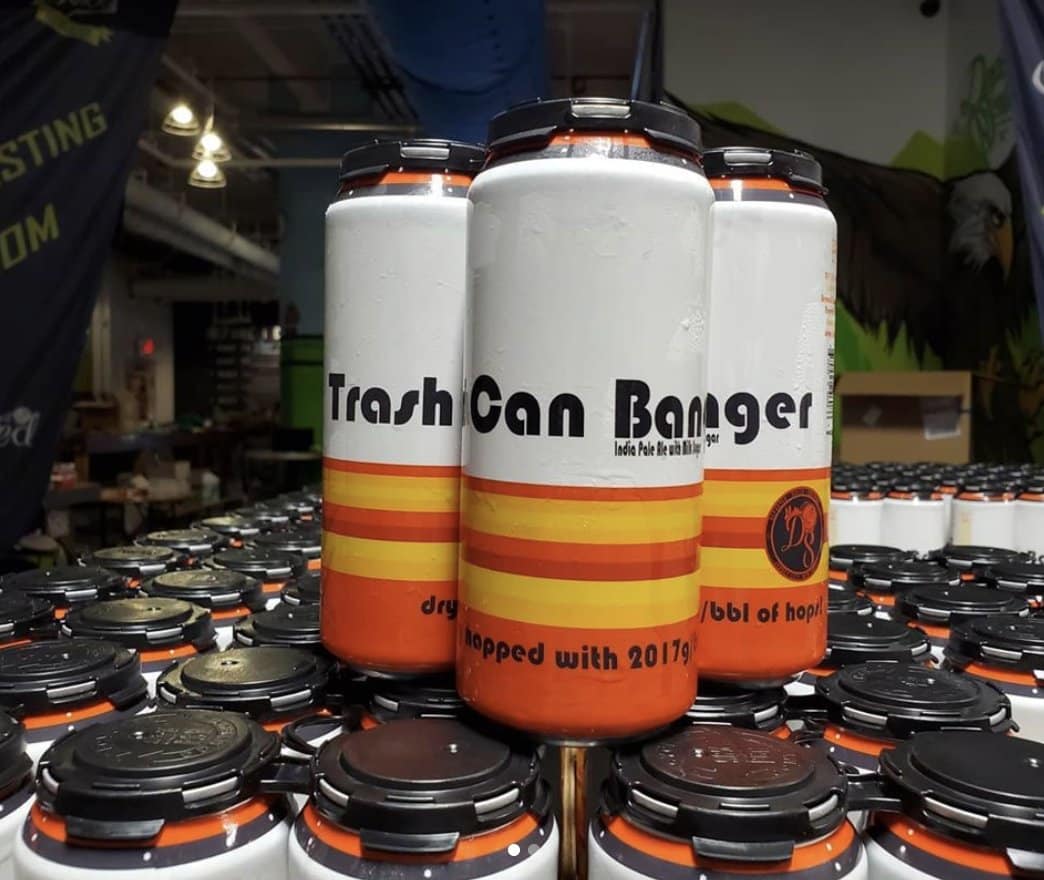 Over the last week here at Beer Edge, we received no fewer than a dozen press releases about COVID-19 related beers. Most of them had clever names and were designed to raise money for specific charities. It’s a noble pursuit and a great way to give back and raise awareness for those in need.

It was a pleasant surprise when we came across a new beer release that did not relate to the pandemic and also made us wistful for baseball. Departed Soles, a brewery in Jersey City, New Jersey, released Trash Can Banger, a 5.4% IPA with the following description:

“Sometimes you need to bend the rules a little to Marwin the day, so we’re up and at ’em a little earlier than we should be, getting a fresh new Hazy IPA in cans Justin time for a surprise Sunday release! Some of you may have already gotten the Signs that this was coming today, but beer releases are like a pitcher’s arsenal, and you never really know what’s coming and when…unless, of course, you cheat. When this pandemic first struck, much of our staff worked from home, while Brian rededicated himself to the Art of Brewing…rewatching brewing school classes, reading new studies, and pouring over interviews, trying to Luhn(h)ow we could improve our efficiencies and processes. The result is a Fiers new approach to everything we do, from mashing in, to dry hopping, water treatments to canning, and everything in between.

And, well, we don’t mean to breg, man, but this new beer is Reddickulous, and you won’t want to miss it! Brewed with Citra in our whirlpool, and given a touch of milk sugar for complexity, this juice bomb was twice dry hopped…first with more Citra, then with 2017 grams per barrel of Galaxy and Strata Hops…and just like an Asteroid, the flavor is out of this world! Like a craft beer Minute Made orange juice, to enjoy at a Park this fine day!

Need some #TrashCanBanger in your life? Maybe Collin a favor with a friend if you’re stuck in Correa, to have ’em pick you up some, or Cora rideshare from Dallas to the brewery. If all else fails, throw a Belt & ran to the brewery, with a little Springer in your step, to be here at noon when we open up and release it to the world…Assuming our canning run goes off without a Hinch, 4 packs of this new #DefinitelyNotGlutenFree Banger will be available at noon for $17. Set your alarm to buzz, or tape an electrode to your chest to make sure you don’t forget!

The show Musgrove on!”

The beer is a clever response to the Astros winning the 2017 World Series and the subsequent revelation that the team was engaged in a massive cheating scandal. Some fans of America’s pastime will never forget and some brewers are willing to share a reminder in liquid form.

As you can expect, the brewery was flooded with attention – some love, some hate – after announcing this one-off beer. But hey, we’re talking about something other than COVID-19.

Editor John Holl caught up with Brian Kulbacki, the founder and brewer at Departed Soles to ask about the beer, the reaction, and the backlash.

John Holl: When did you get the idea for this beer?

Brian Kulbacki: We originally came up with this idea back in February and while I’m not trying to connect any dots, the release time would have really worked out well with when a certain baseball team was playing another baseball team. One local. One not. So, we had planned this way way back and ordered cans before COVID. We use shrink wrap cans for pretty much everything these days because we’re so tiny it saves us manpower so we had to order these cans way back. So we had them sitting there and we had to make the decision of brewing the beer or to fill the cans with something else and peel the shrinkwrap off and slap something else on there. We’re all huge sports fans, huge baseball fans, and frankly just desperate for something to talk about and focus on other than the virus at this point so it kind of was a nice little distraction for us.

JH: What kind of reception did you get?

BK: It seems to come in waves like whenever a different outlet picks it up or tweets it there’s a ton of Astros fans that are very upset with me and saying mean things. One person threatened to kick my dog into the Hudson River if he ever sees me walking him. That was aggressive but there’s also a ton of Astros fans that are reaching out to me and think it’s the greatest thing ever. Then there’s the Dodgers and Yankees fans who are piling on as well with support. Overall, it’s been pretty funny, I mean, if Astros fans want to be proud and brag about the World Series win, own it. Banging on the trash cans was a real thing, I didn’t make it up, I just made a beer.

JH: Threats against your dog are serious, and people have also been taking to your various internet pages to leave bad reviews, right?

BK: I think something like this opens people’s eyes to see that we brewers get a lot of flack on social media. People are hiding behind computers and Instagram profiles and trying to bash us. Obviously we’re on Worst Beer Blog, and that’s weird. But, we have people from Houston going on our Google and Yelp pages and leaving one star reviews because they are upset about a beer they will never have from a brewery they never visited. It’s crazy.

As much as I’d like to say that it doesn’t bother me, the truth is that those reviews help people find us. We are right across from New York City, there are a lot of hotels near us that have visitors. If people think we’re not a good place because some folks had hard feelings because of a beer, it affects my business and my employees. So, I need to tackle those.

JH: What’s next with the saga of Trash Can Banger?

BK: Well I’m sure I’ll offend somebody with something new eventually. We’ve had a lot of people in Texas reach out to us asking about how they can get the beer. So maybe we’ll do a collaboration with a brewery there when things are lifted and we can fly down and make the beer again and get it to more people in the state where they want it, and obviously donate some of the proceeds to a charity.

This interview has been edited for space and clarity.