The Case For Public Drinking 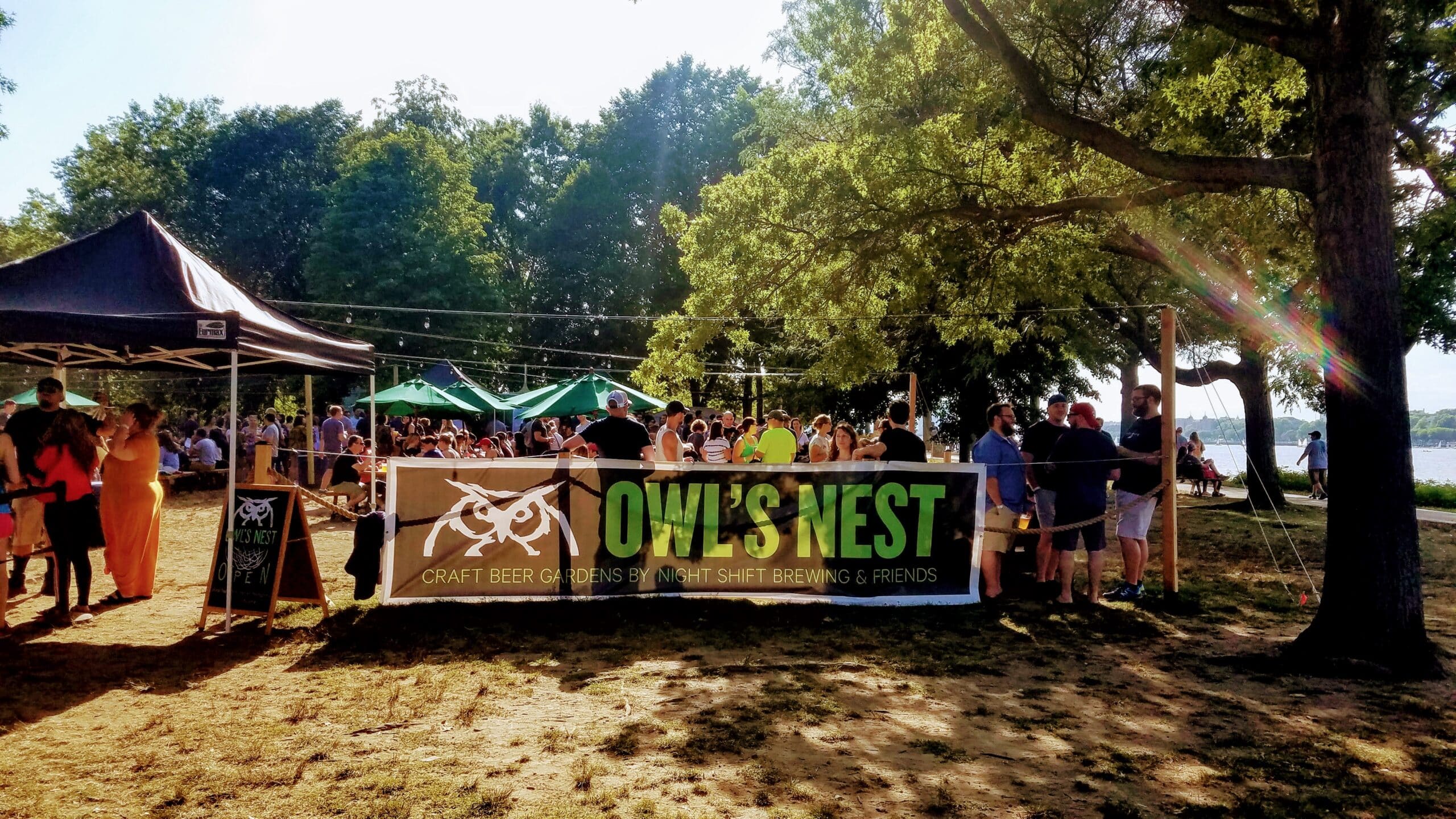 Liquor store employees load up their pickup truck with kegs and fill up growlers in their customers’ driveways. In Brooklyn, bars are filling Mason jars and plastic bags with mystery cocktails and selling them through a window to the public walking by. At Trillium Brewing in the Boston area, the brewery opens for online sales at 9am sharp every morning, sells out its daily allotment within minutes, and staff spend the rest of the day delivering beer directly to homes across half the state. The wild new world of COVID-19 alcohol laws are here but will they stay?

In the days before the pandemic closed bars, restaurants, and breweries around the country, liquor laws largely followed the same models from state to state. To be sure, quirky beer laws can be found throughout the country. Some states sell only through state run liquor stores, others allow booze to flow freely through grocery store taps, while others restrict sales on Sundays.

In pockets of the country, however, a relaxing of the usual restrictions has long reigned. In Las Vegas, around the clock drinking on the streets is generally permitted. In New Orleans, people walking the streets with a drink in plastic “go cups” is a regular sight. Similar scenes occur routinely in parts of Savannah, Georgia, Tampa, Florida, and other cities. The exceptional nature of these experiences became a tourism draw in their own right. The novelty of being able to police one’s self, to make the adult determination to consume an alcoholic beverage in public in a responsible manner, seems foreign to most Americans. Now if you’ve traveled through major European cities in the summer, you’ve undoubtedly watched young people laughing together in a park, all while drinking cans of macro lager. The same can be said of places around the world. But in the United States, antiquated local, state, and federal liquor laws remain encased in amber, preserved from the time of their passage and not subject to revisiting or reconsideration.

Aside from the outliers of Bourbon Street or the Vegas Strip, consuming beer in public in the U.S. usually results in a fine or even arrest. Governmental authorities refuse to trust the public with having a beer or two in public without acting like fools. Now this doesn’t mean that Americans refrain from public drinking, quite to the contrary. Instead, we hide our public drinking, treating it as a shameful act, something reflecting poorly on us and that should be obscured from public view. Whether in the form of the blazing red Solo cup, a koozie barely covering a beer can’s label, or pouring booze into a soda or other bottle, we resort to various tricks to fend off the cops and public judgment. This forced clandestine behavior only reinforces the view that the consumption of alcohol in public should be equated with publicly intoxication. It’s a thing to prohibit, to root out, to get rid of.

America has long relegated the consumption of alcohol to bars and restaurants. In doing so, localities have further sought to control the public’s ability to consume alcohol under stringent liquor laws. Many states and cities limit the number of alcohol sale licenses, causing an artificial and inflated market for their value. Each year, the bar, restaurant, or brewery pays a few hundred or thousands of dollars in these markets to renew their licenses, paying the fees directly to the city or state. If you want to open a new establishment in an area that has hit its limit on licenses, you either have to contemplate not serving booze—something that is rarely tenable in major markets—or you have to buy someone else’s license. This governmental created scarcity causes the value of liquor licenses to skyrocket, often going for hundreds of thousands of dollars on the open market. And none of this profit goes to the city or state, only into the pockets of private companies and owners.

American liquor laws are pretty stupid. And the COVID-19 pandemic gives us a once in a century chance to change them.

With bars and restaurants starting to reopen across the country, one thing is clear: while there is substantial pent up demand to return to normalcy, including imbibing in bars, there is substantial public trepidation over sitting near other people let alone standing shoulder to shoulder with others while ordering or drinking beers indoors. The states that have reopened to date have demonstrated this, with attendance numbers remaining way down compared to pre-lockdown numbers. And it appears that folks won’t be returning in the numbers that places need to make a profit based on their already tight margins.

Yet that demand for socializing with others is there and much of the public, having been forced indoors for more than two months with little to no outlet, is itching to get back out with friends and family, if at a safe distance.

Now is the time for cities and states to contemplate allowing public drinking.

The craft brewer taproom trend demonstrated that drinkers want options, not just the usual bar or restaurant. They want stripped down drinking experiences, a simple room with some tables, chairs, and taps to enjoy with friends. They don’t need the full restaurant experience, maybe a food truck or just some bar pretzels.

Moving beyond the tap rooms, small breweries also found success in opening other community spaces in which they could serve their beer. In the Boston area, outdoor drinking spaces are not only at a premium, they are exceedingly rare. A cramped city without much sidewalk space, roof decks, or other outdoor commercial spaces, the chance to drink outside of a cramped bar room is pretty limited. But when the city finally allowed small breweries to open and operate beer gardens on public land, the consumer response was immediate and excited. Trillium operated a popular beer garden on downtown’s Rose Kennedy Greenway, a couple mile long winding swath of gardens, public art, and grass that replaced a torn down highway that bisected the city. On the verdant Esplanade next to the Charles River, Night Shift Brewing operated a pair of popular beer gardens, always packed with young people, families, dogs, and folks laughing all while drinking at communal tables or on the grass. Other breweries opened up weekend beer gardens on vacant public parking lots, in suburban town squares, and even right next to City Hall. While some local bar owners groused over the new competition, the public response was strongly supportive of these new open-air venues.

As much as I would like to sit arm to arm with a complete stranger at a local bar, casually discussing local events or the weather, it’s going to be a long time before most people feel comfortable doing that. Until we’re able to return to that kind of normalcy, assuming it can return, local and state governments should continue the creative thinking they’ve developed during the pandemic response and contemplate allowing breweries or bars to operate beer gardens in large, outdoor public settings and to relax local laws governing open containers. With the weather improving, people want to get together while still being able to maintain proper physical distancing. Beer gardens satisfy a long suppressed hunger for open-air forums of public fun. The public should be allowed to enjoy some communality and conviviality, fresh air, and a beer or two all in the company of good friends and their restorative laughter.

Other cities, such as Philadelphia and San Francisco, have done well in recent years in developing underutilized public spaces into public drinking venues. Whether a vacant parking lot or the outdoor space surrounding a downtown high rise, the cities allowed bars and breweries to operate public beer gardens to maximize their utility and public worth, all while bringing in valuable tax dollars.

American bureaucrats love to cite all the reasons why a new concept won’t work. Look no further than the long and even continuing battle over food trucks to see how governments respond to innovation in public hospitality. But COVID-19 gives us the opportunity to try some new projects, to test whether Americans can be trusted to act like adults and responsibly consume alcohol in public spaces. Until a return to normalcy can be achieved, local governments should allow creative grassroots entrepreneurs to create temporary and pop-up communal gathering places, ranging from coffee stands to full-scale beer gardens. The softening of restrictions on beer and wine licenses and drinking opportunities will hopefully lead to the responsible enjoyment and respect of alcohol in new spaces.

In a time when we spend so much of our week isolated from others, creating socially acceptable opportunities to drink in safe, public environments will allow the United States to reconnect alcohol with community and public culture, shedding its decades long push to hide drinking away as a public danger.